Canada has plans for recreational marijuana legalization in the very near future.  If you are a Canadian we are asking you to take a moment and think about this and all that it will mean in communities all across Canada.  If you feel it in your heart to support us and add your voice we urge you to help us in this truly David versus Goliath battle.

If you are at all uncomfortable with this, please sign our petition today.  This will be your last chance.

You may be asking yourself what would full legalization of recreational marijuana look like.  There is no need to imagine. Here is one story from the adjacent bedroom communities Blackburn Hamlet and Orleans in the city of Ottawa, Ontario.

Here's a picture of exactly what to expect.

This is a pot dispensary that was illegally selling pot to the public while children were attending the Kumon math tutoring clinic in the very same building.  Local citizens organized, spoke publicly with the police imploring them to enforce existing laws and it was shut down, along with eighteen others in Ottawa.

However, this is what is coming again very soon, but with the sanction of the Federal Government, if the recommendations of a federal Task Force are implemented. And this is why we need your support for our petition. 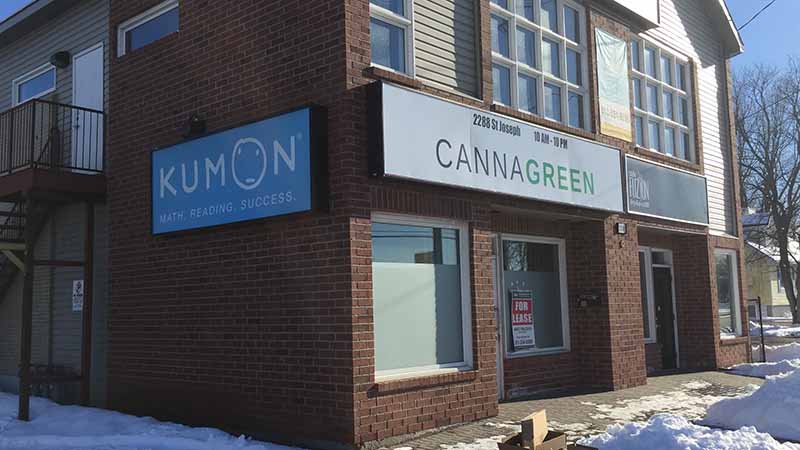 A Marijuana Shop In The Same Building As Kumon Tutoring Clinic - Orleans, ON Canada

This shop was located less than 400m (quarter mile) from a high school, on a major street, with banks and restaurants and other very active businesses.

Parent's of children were distraught - some even in tears - as they walked their kids past the front doors.  Young males coming and going. The pungent odor of skunk in the air as some people smoked not far away. This was well documented by local media.  But it's different when you live here and it's your children and your backyard.  Your support would be so greatly appreciated.

Now let's look at what happened to the existing businesses in the slightly quieter community of Blackburn Hamlet when they awoke one day to find their next door neighbour was a pot peddler.

A neighbouring pot shop can kill your business

A marijuana dispensary set up unannounced in the far left corner unit to the surprise of three other long established businesses.  One was Blackburn Hamlet's flagship real estate company and community supporter. The other two were small restaurants.  Not seen is a family run daycare in a residence that abuts a parking area directly behind the pot shop where customers would sometimes go to smoke their weed. Only one tenant remains today after the pot shop was eventually shut down.

But the financial pain for all three of these businesses has been severe.  The real estate owners began to suffer an immediate loss in business as prospective clients were uncomfortable shopping for a home with a real estate company right beside a pot shop.  In an effort to save their business and their once stable livelihood, they had to abandon their lease, pay thousands of dollars to cancel existing contracts and find a new home for their offices.

The landlord claimed he was duped into renting his unit to the marijuana business. 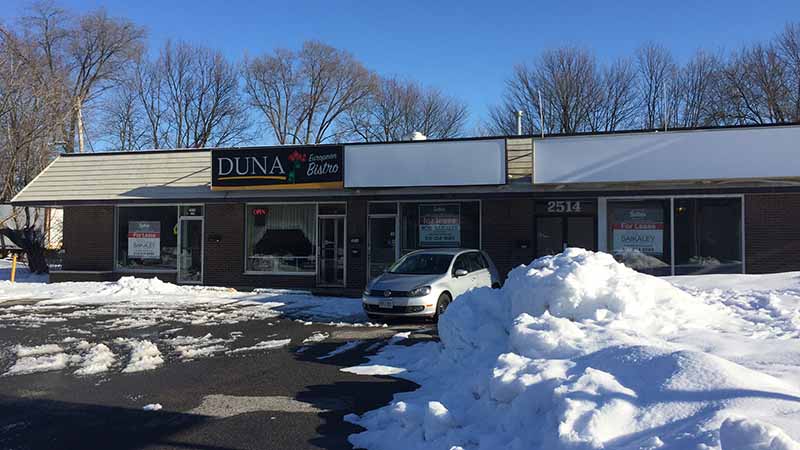 A Pot shop set up in the corner unit. It was shut down, but not before causing financial stress for the other long standing businesses two of which had to shut and find new offices.

Armed robberies are not uncommon

Other marijuana dispensaries in Ottawa have been targeted frequently by local criminals, broken into, held up at gunpoint and robbed, thus compromising community safety and harming the long established businesses that find themselves next door to these new neighbours.  These robberies have been well documented by local media.

Every real estate agent knows the first things residential buyers look at are proximity and quality of nearby schools and crime rates that are publicly disclosed by the local police.  Ask yourself if you are comfortable with any of the scenarios just described.

If you are uncomfortable, we graciously ask you to support our petition today.

In December 2016 a Task Force on legalizing marijuana in Canada published their recommendations.  Two of the biggest things they recommended which may come as a bit of a shock to the average non-drug using, non-pot smoking Canadian (and almost 90% of Canadians 25 years or older don't use marijuana) were:

The writing is on the wall but with your support we have a chance.  If you sit quietly and say nothing, retail store fronts will be in and in many more locations. It is now time to act.  Please help us today.

why we finally got active and you should too

These are just a couple of the most visceral reasons we created this petition against marijuana legalization in Canada.  Now that the Task Force as made its recommendations to support legislation which will permit the exact situations we just described, it is time for all Canadians to spend some time thinking about this.

We are all busy people.  Unlike those who are paid full time to work for a marijuana lobby group with huge financial gains at stake for new legislation, we are unpaid volunteers. We are parents, business owner and community residents that finally realized the system is rigged in favour of some massive lobby groups.

Now is the time to express your opinion if this resonates with you at all. It really is the only hope that is left.  You will be part of a large group of Canadians that are not on board with legalization of recreational marijuana. Just click any of these links or the one at the top of the right hand column.